Description :
History has it that vines were planted here centuries ago. Two thousand years ago the Latin authors Martial, Pline l’Ancien, Columelle and Plutarque called the wine from Côte Rôtie “Vin Viennois”.
During the Middle Ages and Renaissance, the reputation of the wines from Ampuis just grew bigger. Before the revolution wines from Côte Rôtie were sent to Royal tables around the world; England, Russia, Prussia and France. The vineyard reached its peak in 1890. Every inch of sunny hillside was planted with vines. At this time, the outbreaks of Phyloxera and other diseases didn’t demotivate the winegrowers. Unfortunately World War One will ruin all their efforts. Over 150 men were sent to war and the vineyards were abandoned. It is only in the sixties that the vineyard was attended again.


Terroir :
The vineyard of Côte Rôtie is located on the hills of the right bank of the Rhône river. Some of the slopes exceed 60%. The vineyard is located at an altitude ranging between 180 and 325 metres and is composed of 73 localities.
The main stone is granite covered in places by schist but also sand and calcareous soils.
For the most part, our wine comes from the southern part of the appellation; Côte Blonde and Coteau de Tupin. We wished to make wines with great distinction but also with elegance and finesse rather than wines from the north that tend to be harder and more powerful.


The vintage :
Winter 2014 is characterized by mild temperatures for the region and heavy rainfall until mid-March. Heat and water reserves allowed an early start of vegetation. Spring is dry until late June, with few signs of water stress. However flowering and fruit set were optimal, pledge of a great harvest . The months of July and August, particularly cool and wet, slowed the cycle of the vine , and forces growers to strengthen surveillance. Early September is inaugurated with two lovely sunny weeks , accompanying an optimal maturity grapes. Harvest starts on 17th of september.

Situation :
The vineyard of Côte Rôtie is located on the hills of the right bank of the Rhône riverto the north and south of the village of Ampuis. Some of the slopes exceed 60%. The vineyard is located at an altitude ranging between 180 and 325 metres and is composed of 73 different localities.

Process :
The grapes are cold-macerated before being fermented to increase the aromas of fruit. Maceration and fermentation for about 20 days with pumping-over for the first few days followed by punching-down. Ageing in 1-year-old barrels for 15 months.

Serving :
Currently this wine needs to be decanted at least an hour before serving.
Drink in it’s youth: Slow roasted lamb will be a great match for this wine. 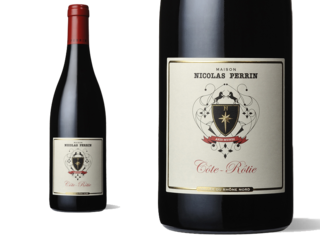