Description :
It is in its French birthplace, between the towns of Vienne and Valence, that Syrah fully expresses itself. For some people, Syrah originates from Shiraz in Iran and was brought back by the Crusades. For others, Syrah appeared in the third century during the Roman Empire, at the time of Emperor Probus. As for Viognier, the lastest scientific research proved that it originates from the Norhtern Rhône Valley.


The vintage :
There was a huge amount of rainfall during the winter of 2013. This allowed to fill up the water tables.
The temperatures were very unusually hot in April but then dropped considerably in May (an average of 9 to 10 C less than usual). On top of the cooler climate, the precipitations were very significant at the end of May, which delayed the flowering of the vines.
The nice weather came back in June. Despite a temperamental spring and the vegetation being a little delayed, the new shoots look healthy and promising.
The summer was twofold: In July, the weather alternated between dry and sunny spells and storms (including a bit of impact with hale). August was a hotter and drier month of.
The accumulated delay was noticed at the time of harvest as we started around September 25th. The maturities were very consistent depending on the appellation, the terroir, the altitude.


Situation :
The vineyard, composed of young vines of an average age of 15 years, is planted on terraces. It covers the hinterland of the Nothern Côtes du Rhône. It is situated on localities of the Southern Rhône, Loire, Isère, northern Drôme and north Ardèche.

Tasting notes :
Colour: Bright Ruby in colour with purple undertones.
Nose: Red fruit, full-bodied and very harmonious with aromas of blackcurrant, blueberries along with notes of spice.
Mouth: the attack is fresh, the wine is lively and mineral. The tannins are soft and round and give immediate pleasure. The balance between alcohol and acidity reveals a harmonious wine. The softness and finesse of Viognier allows to create a wine that is more powerful and full bodied than a simple Syrah. 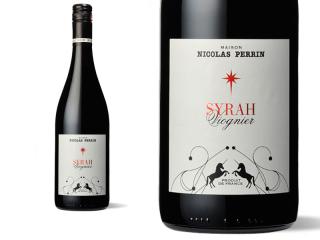